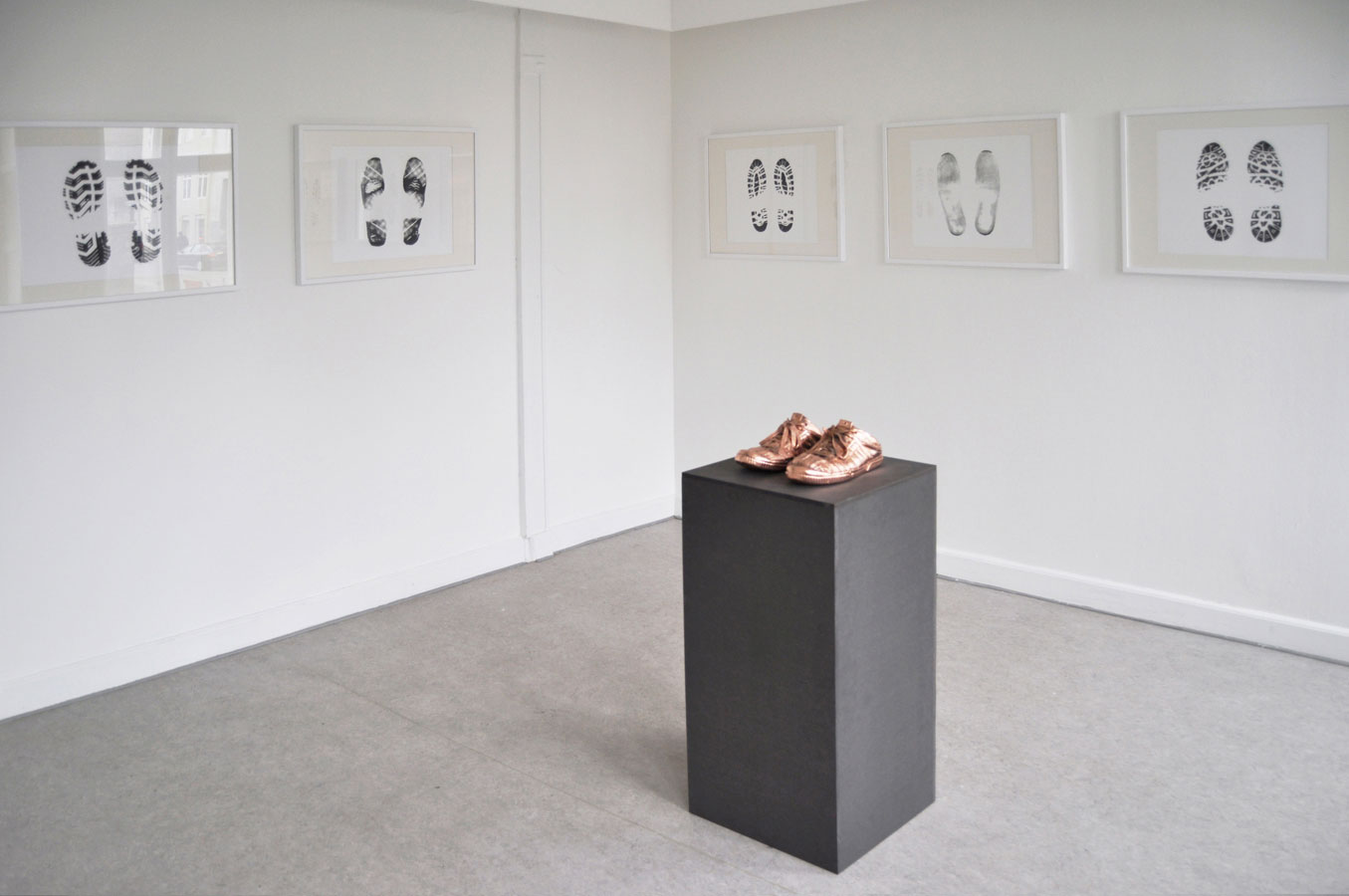 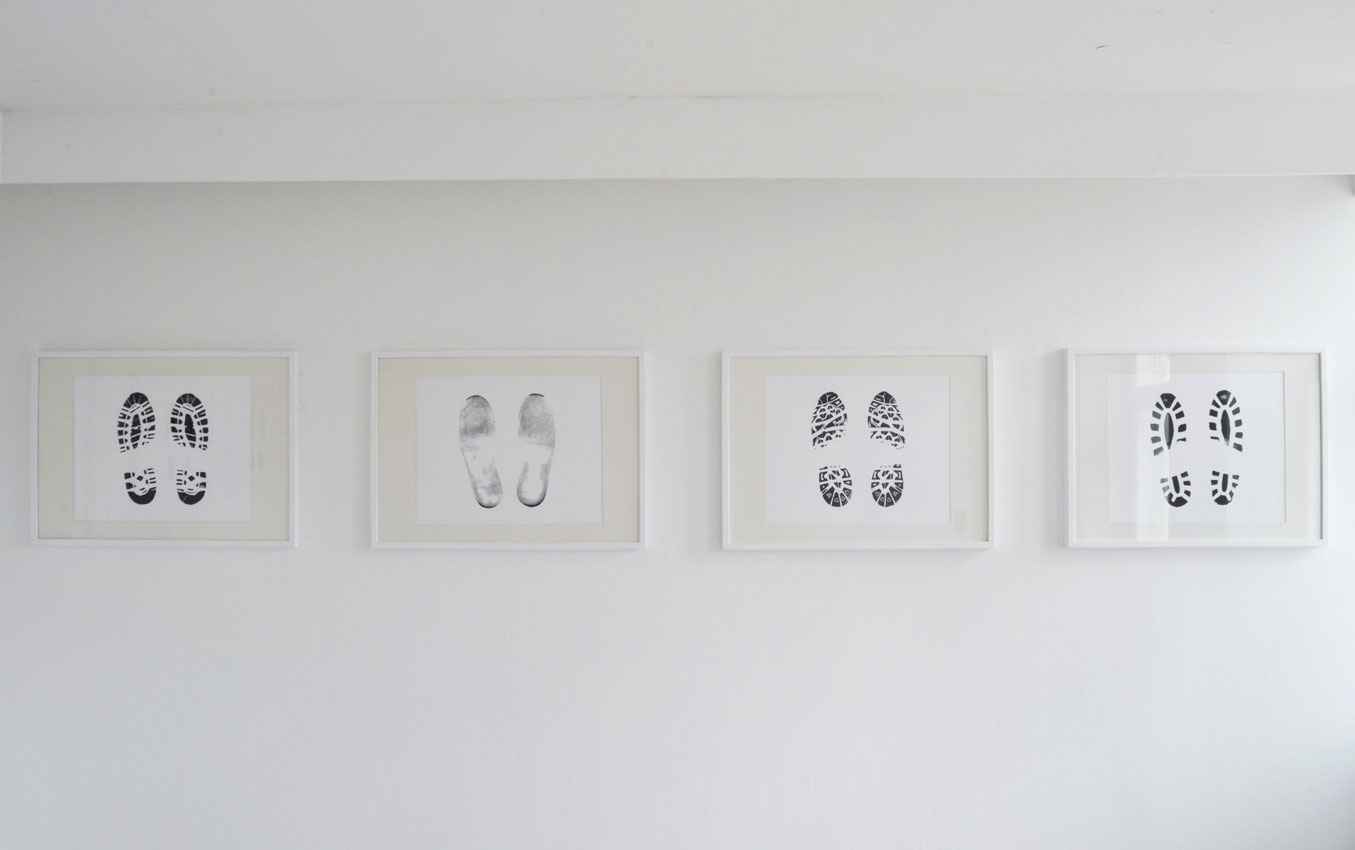 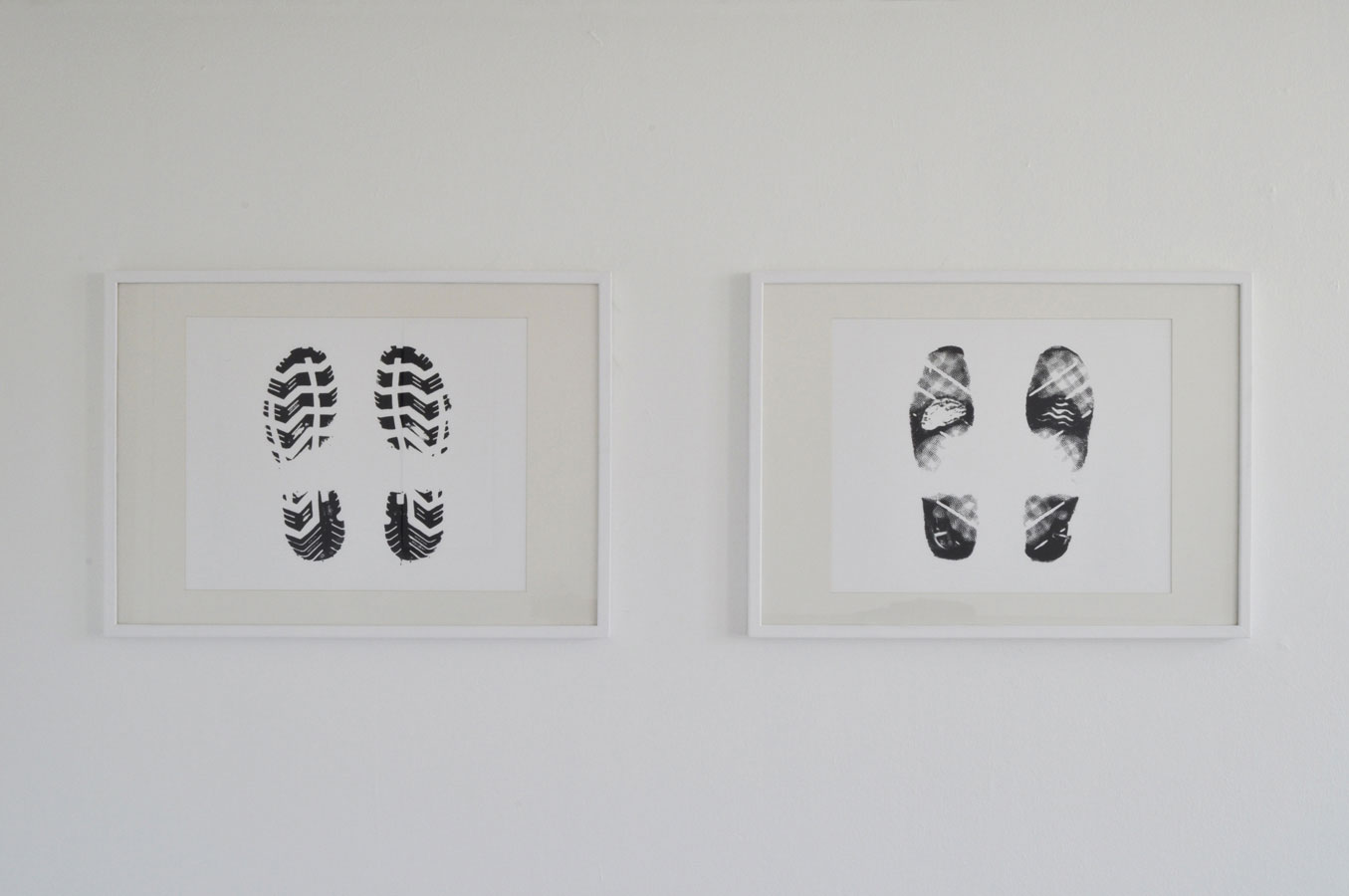 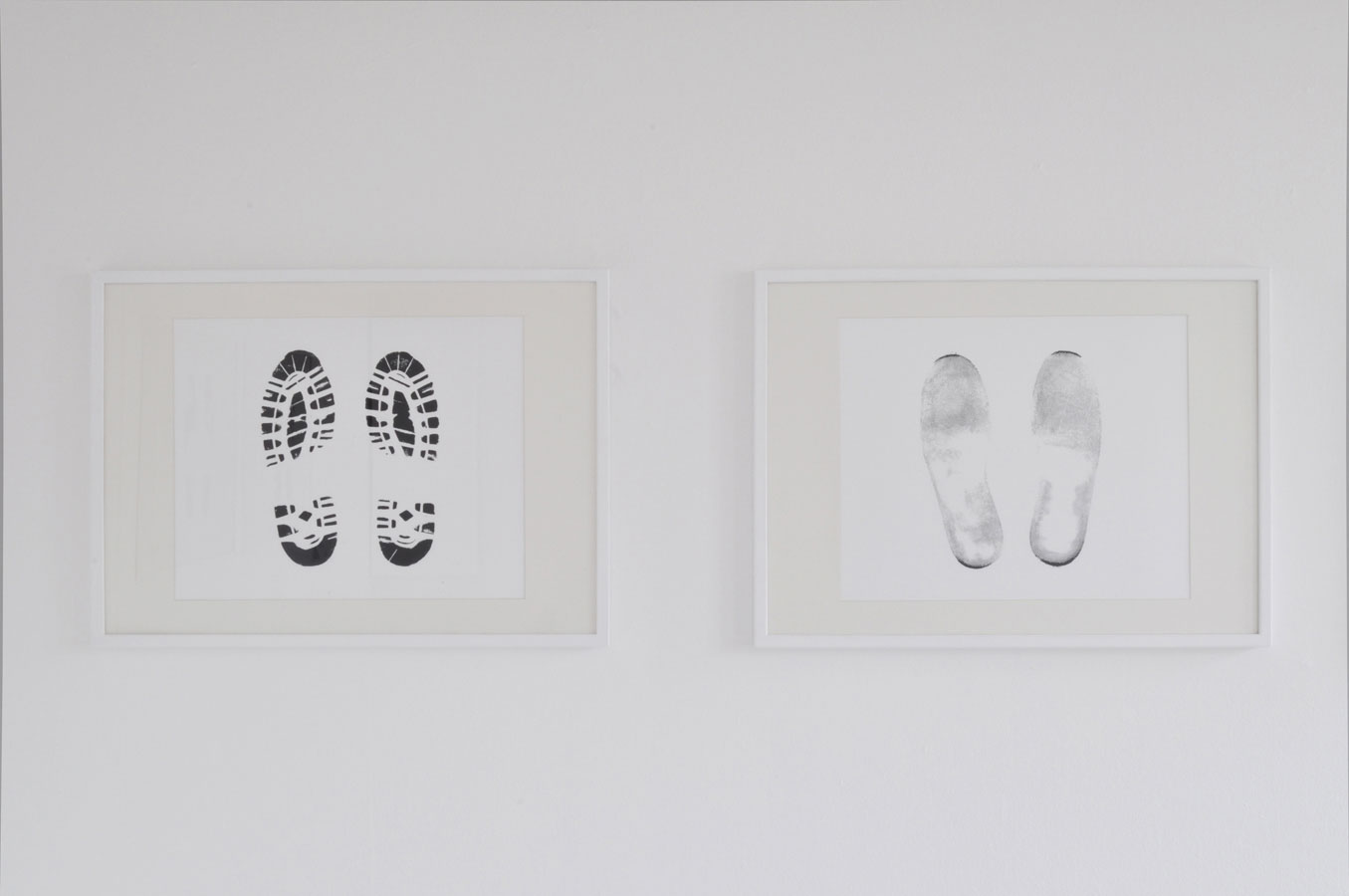 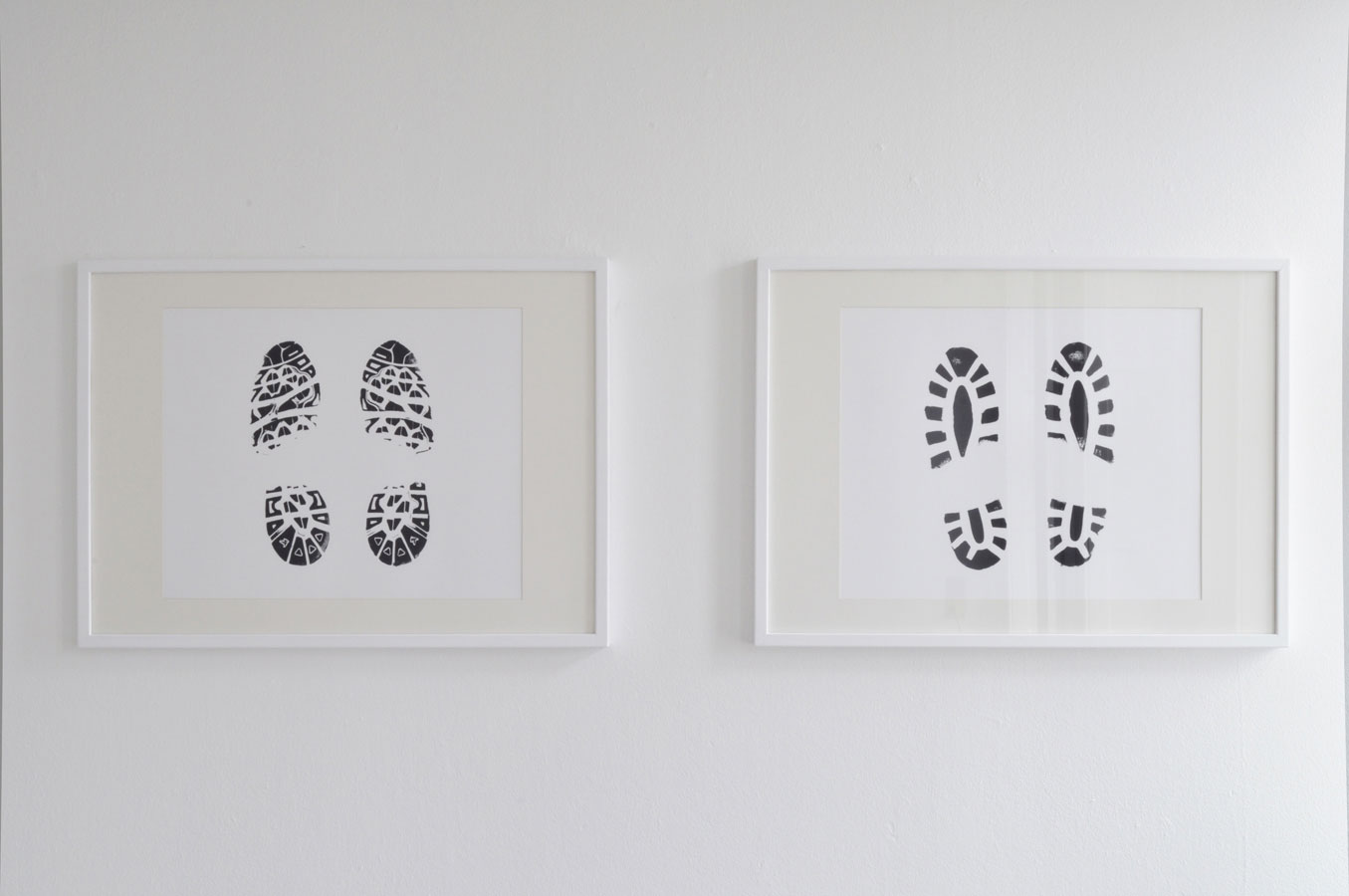 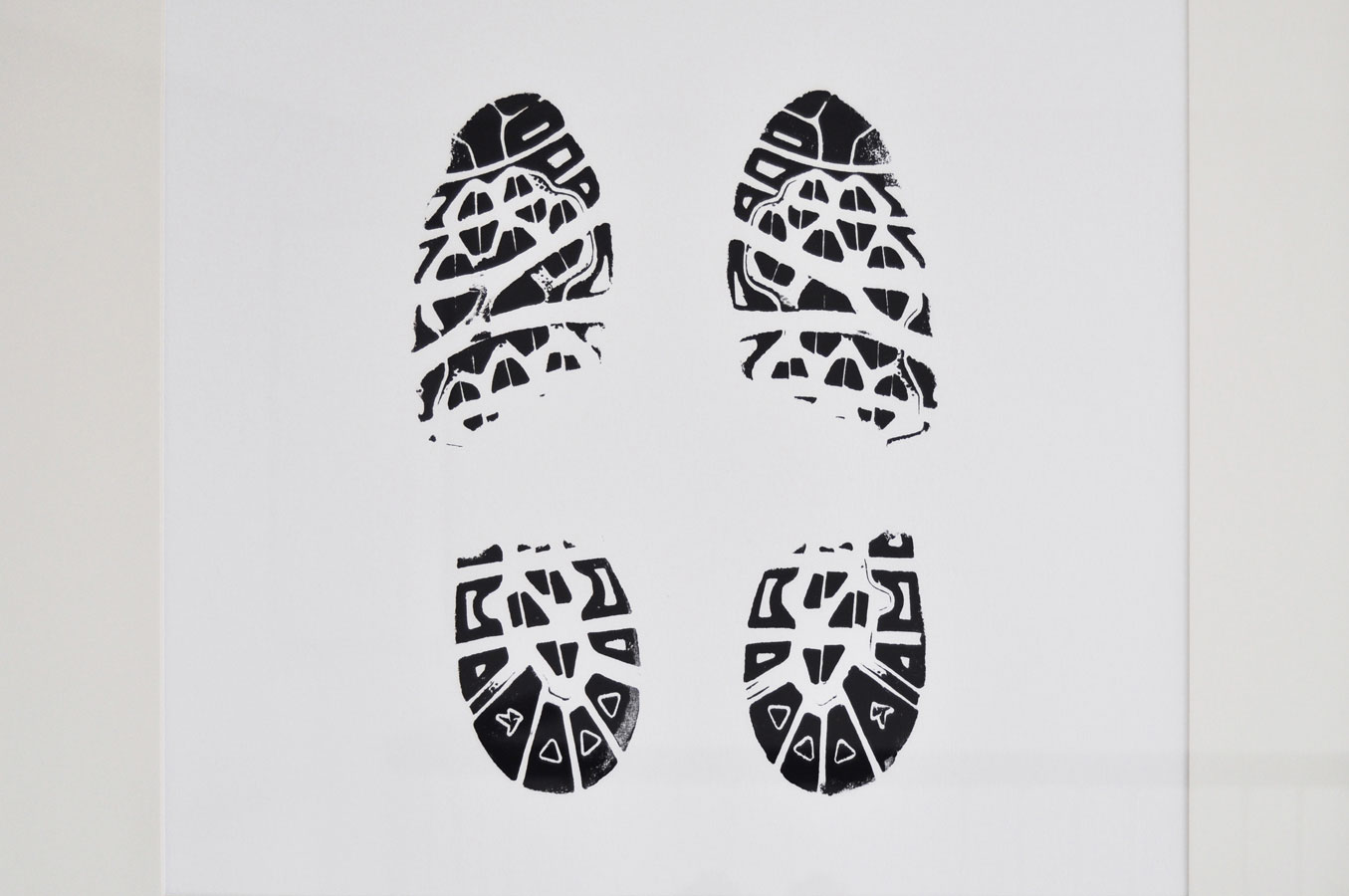 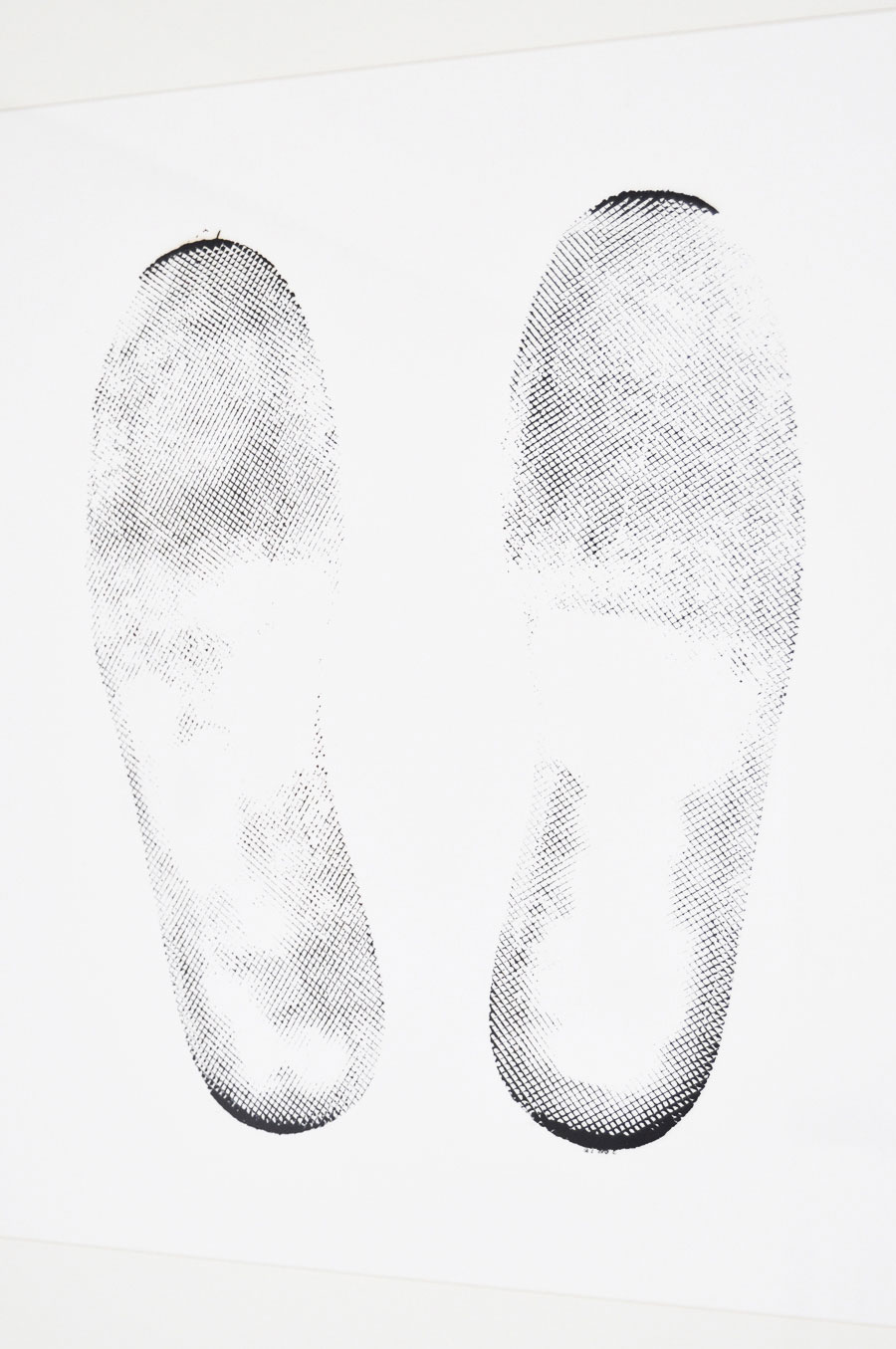 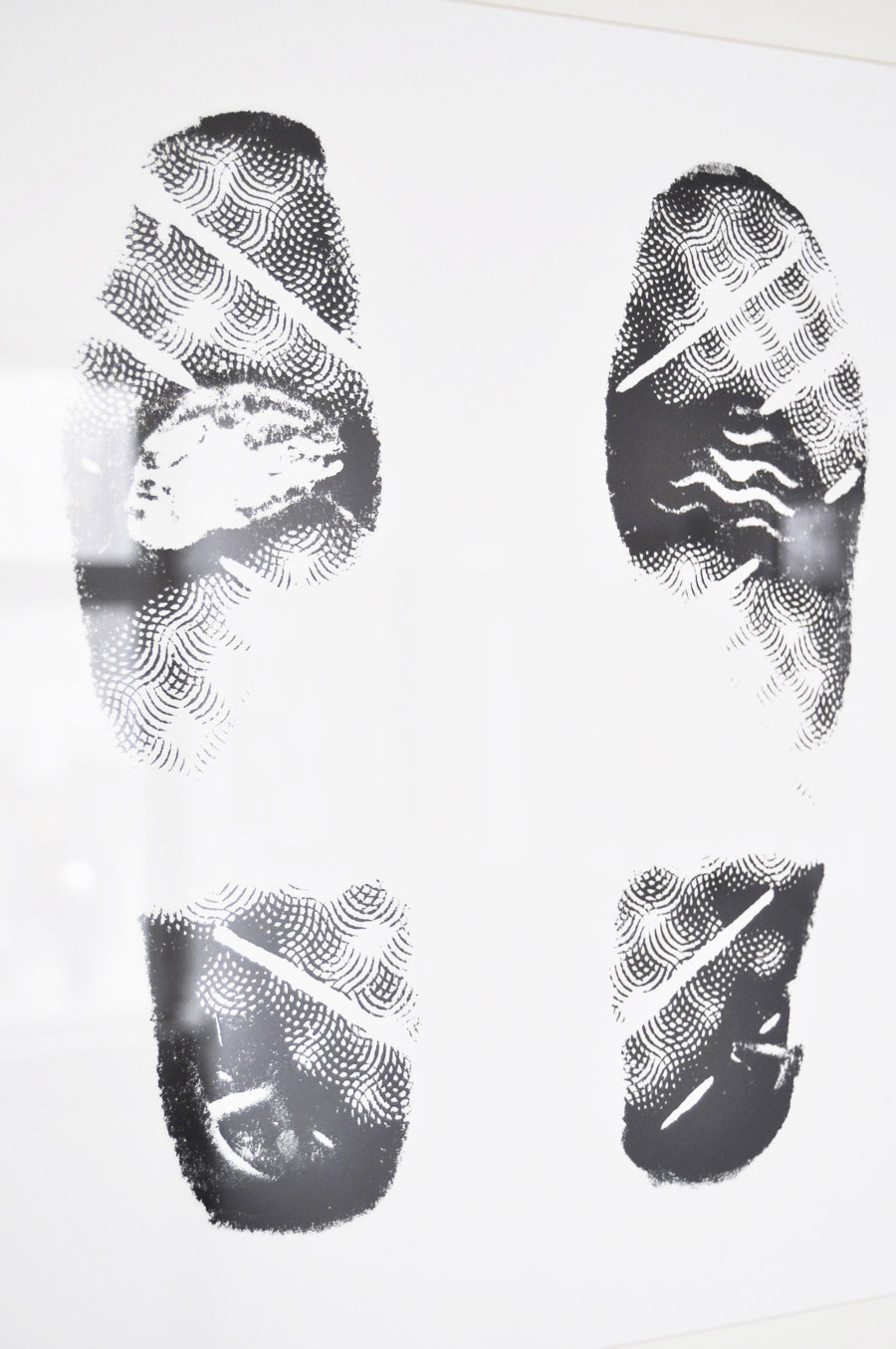 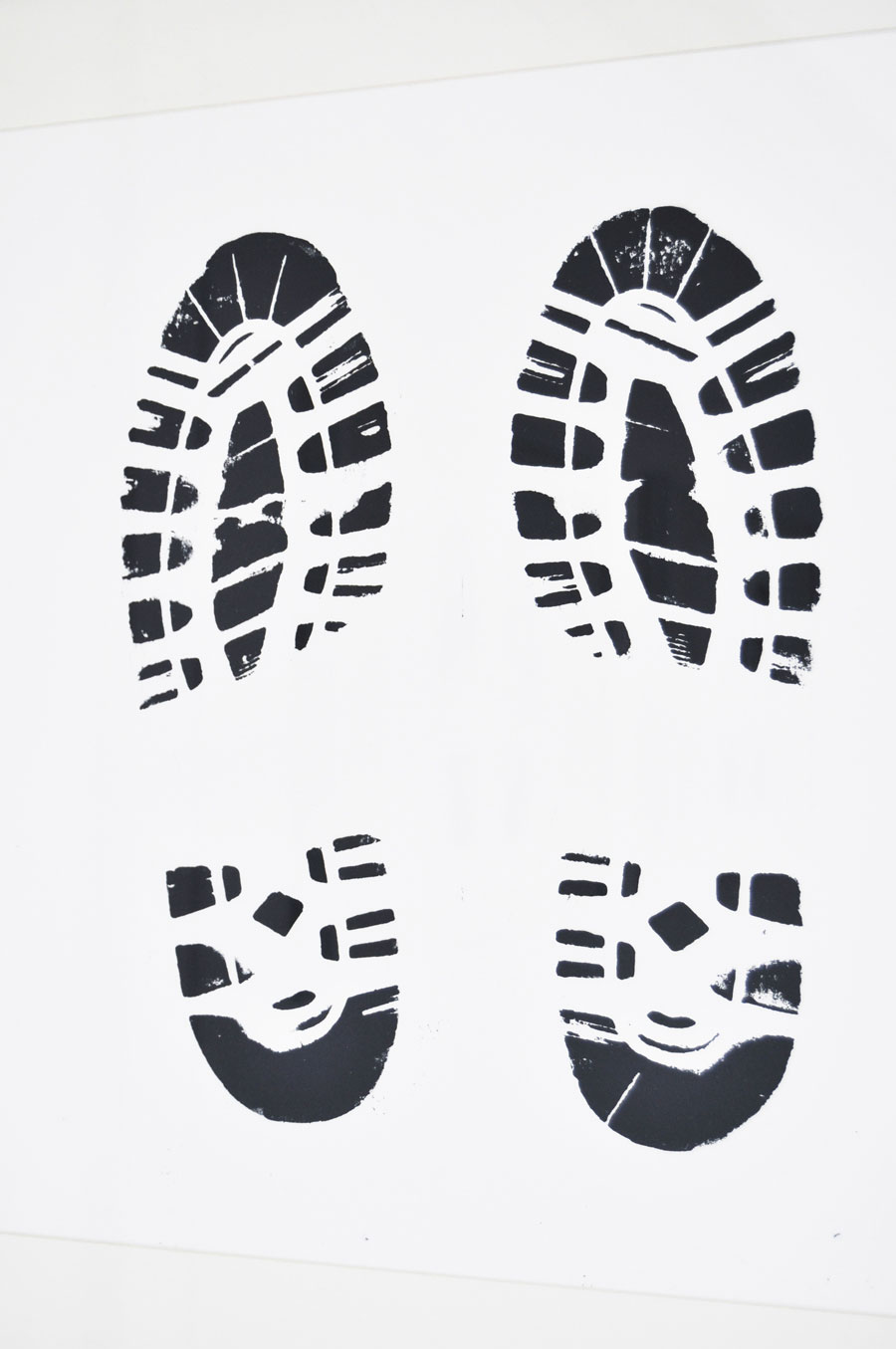 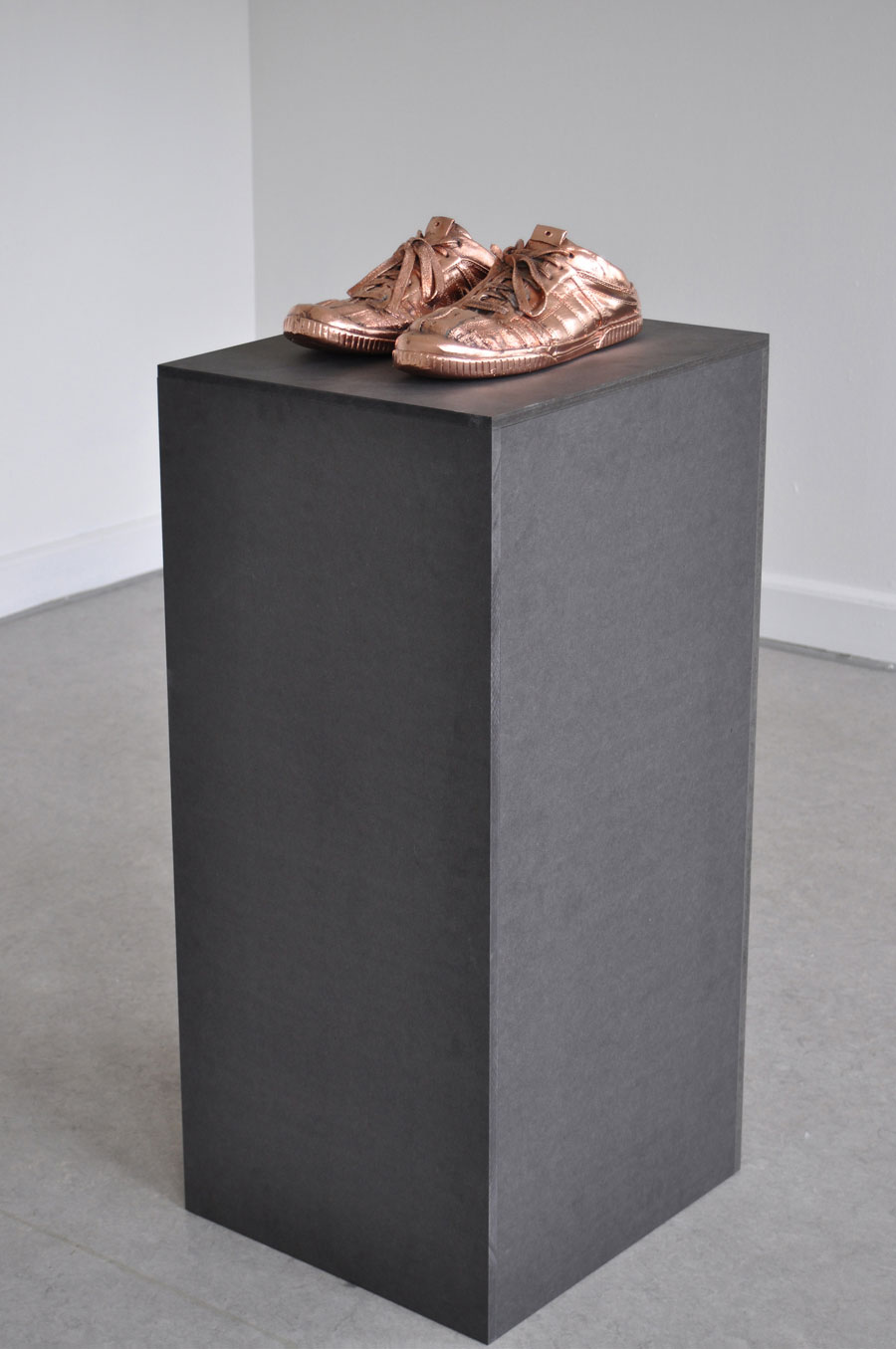 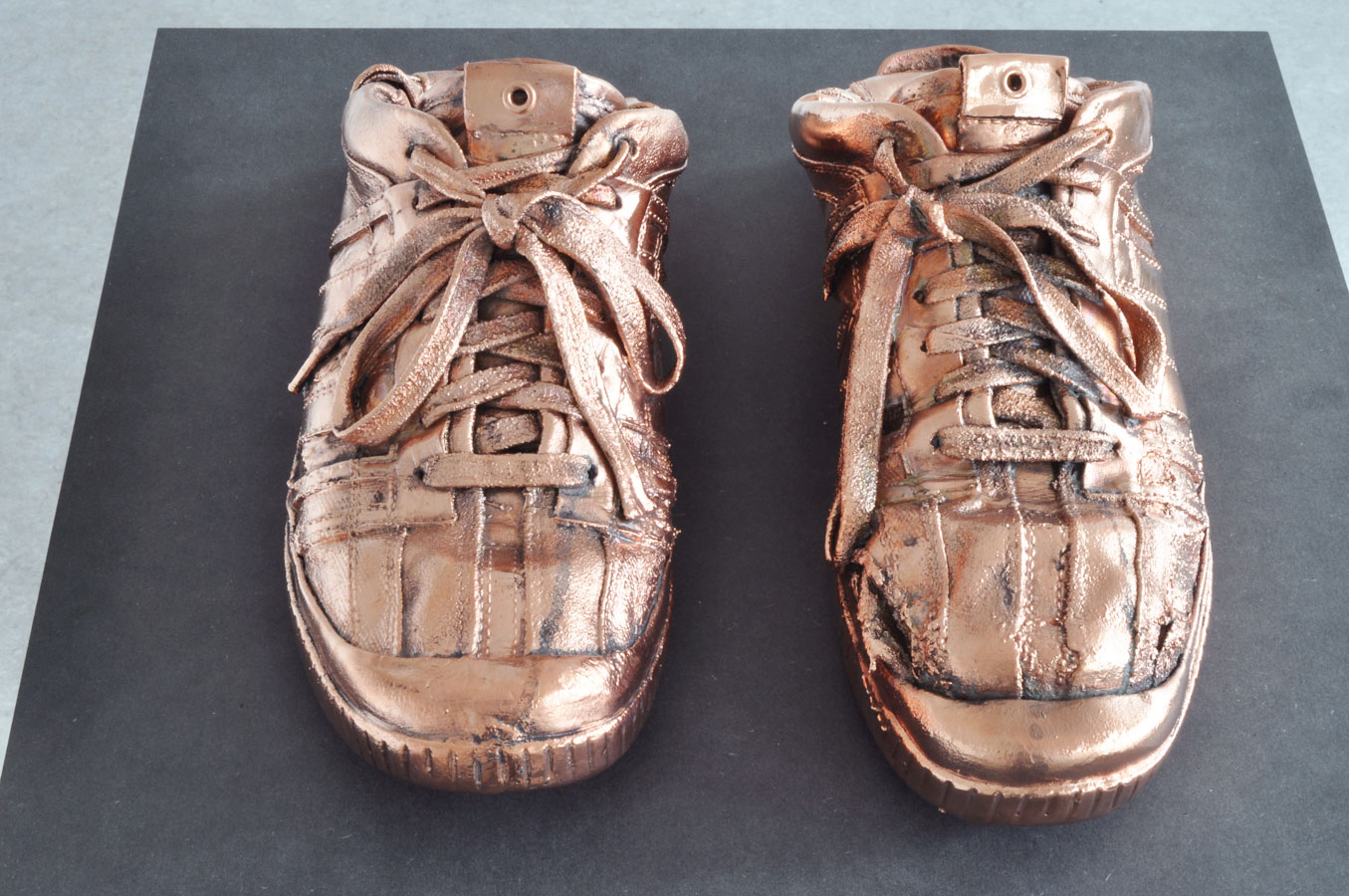 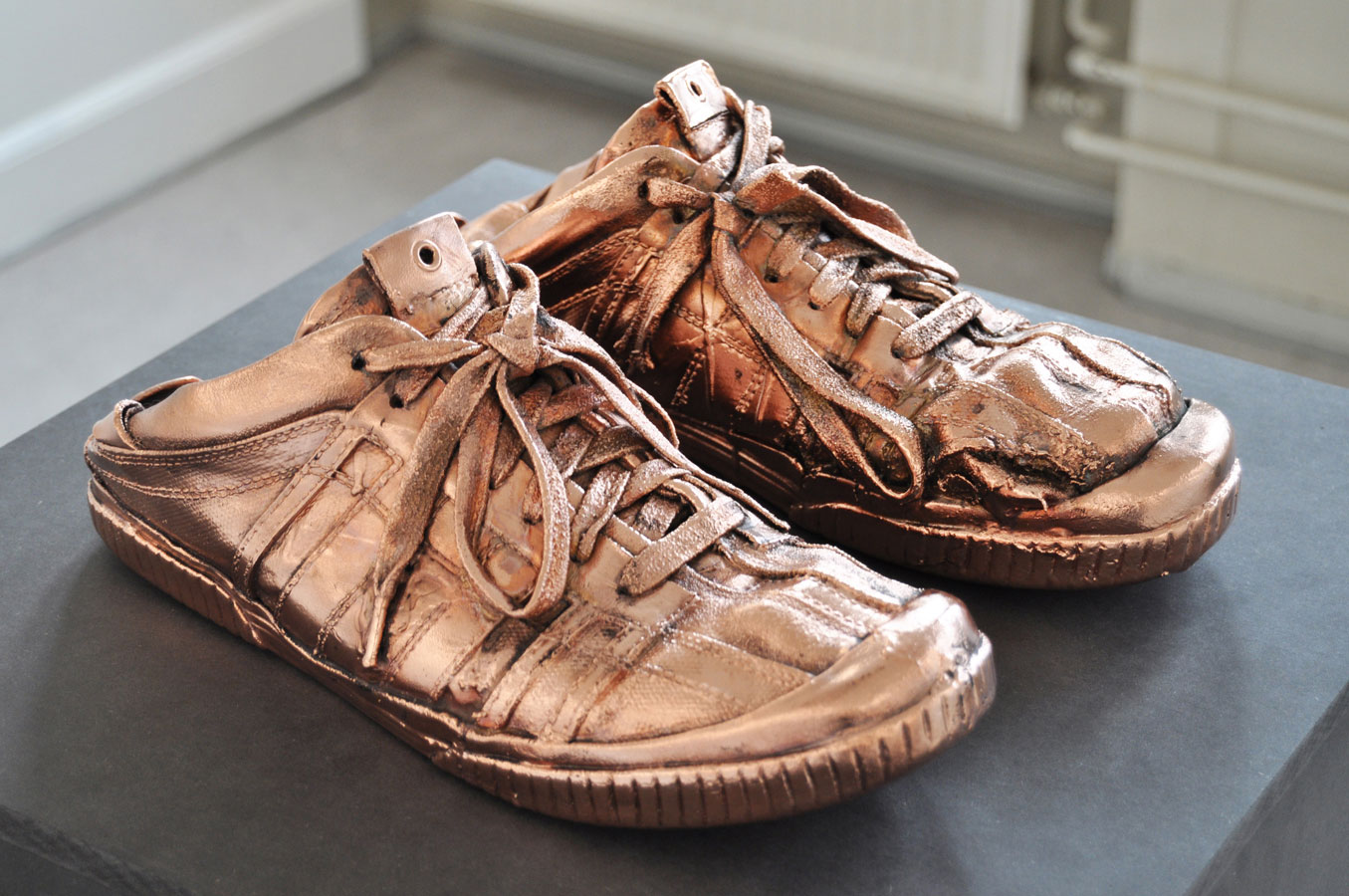 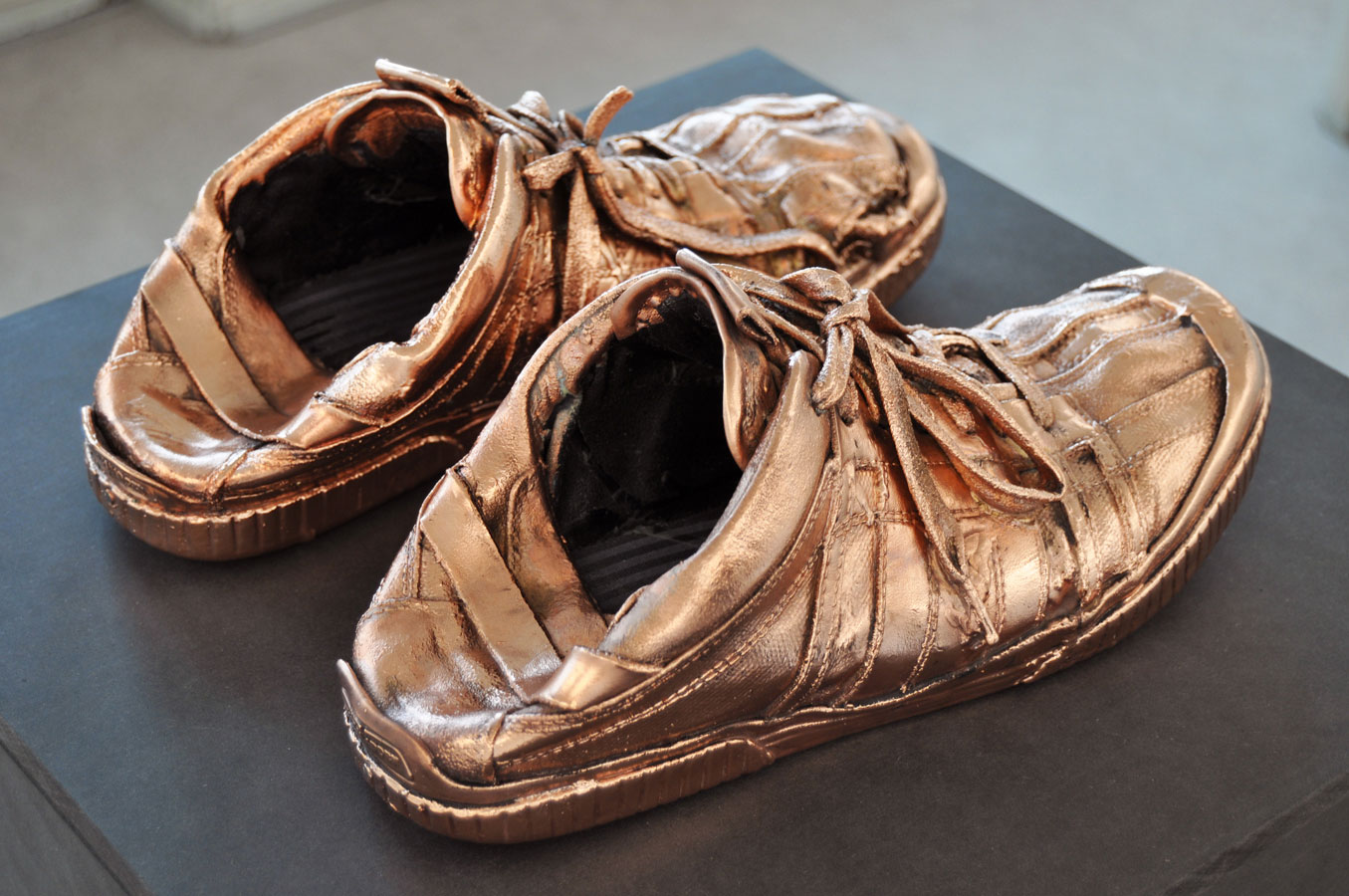 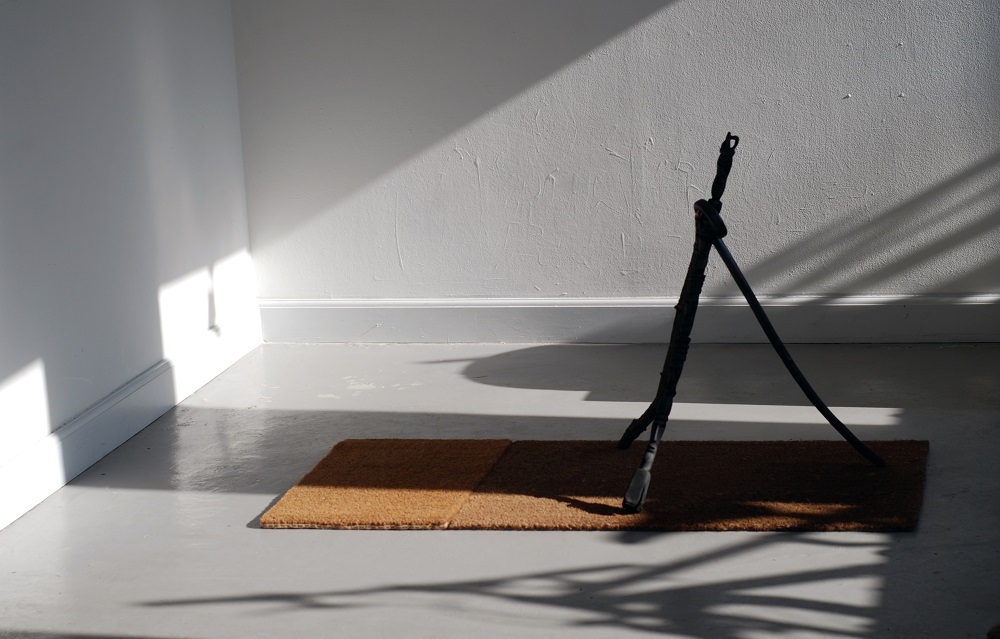 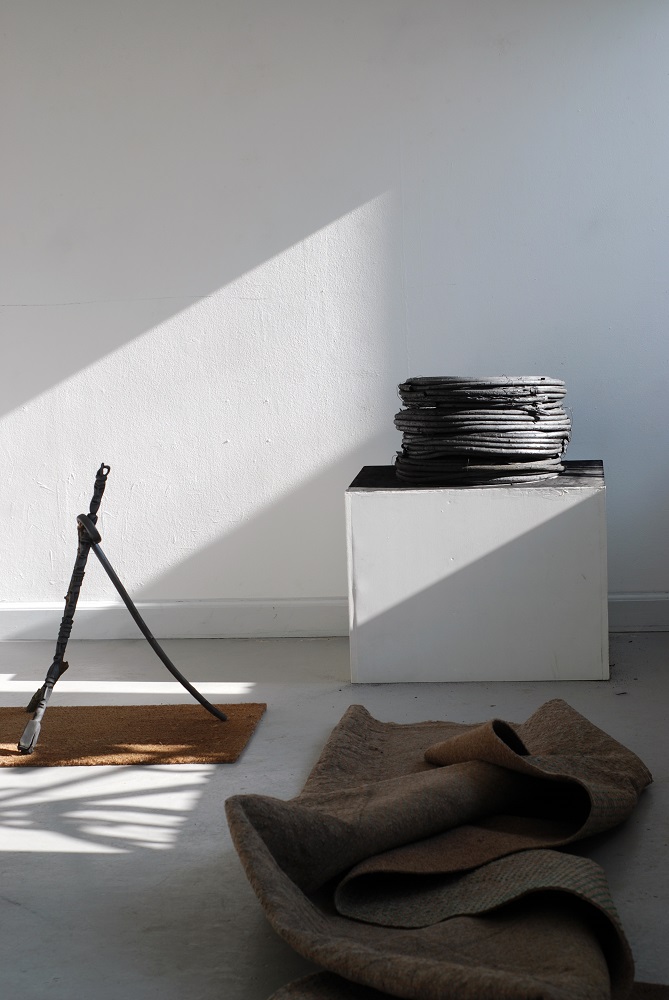 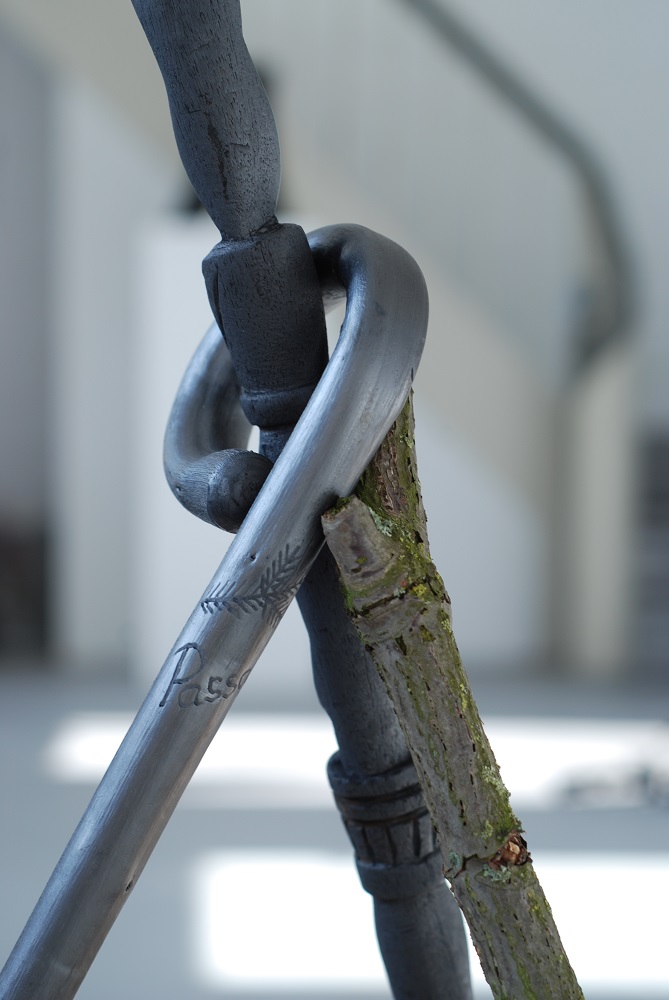 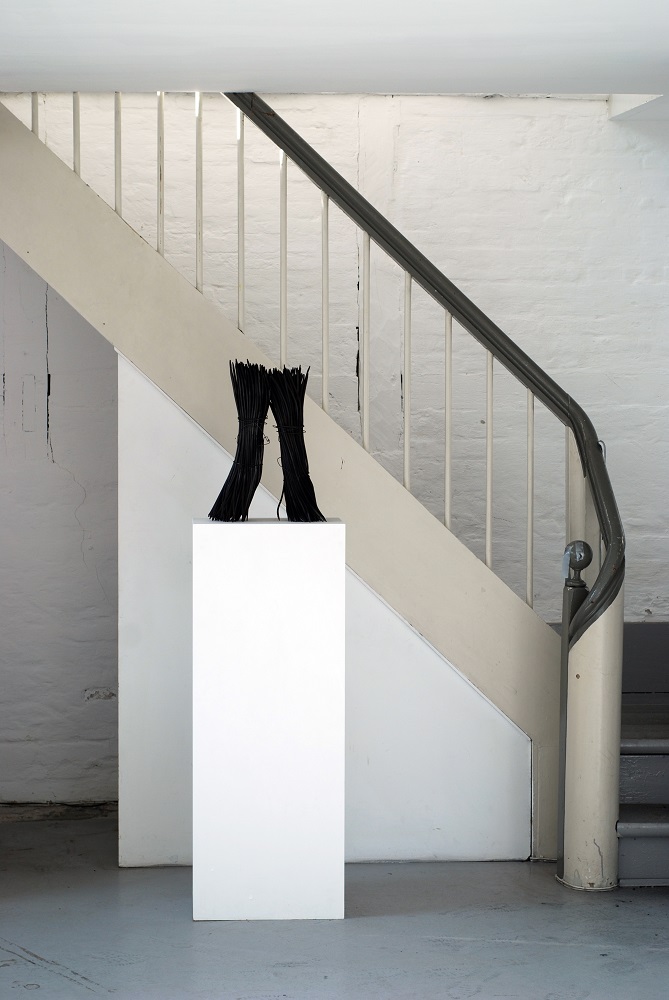 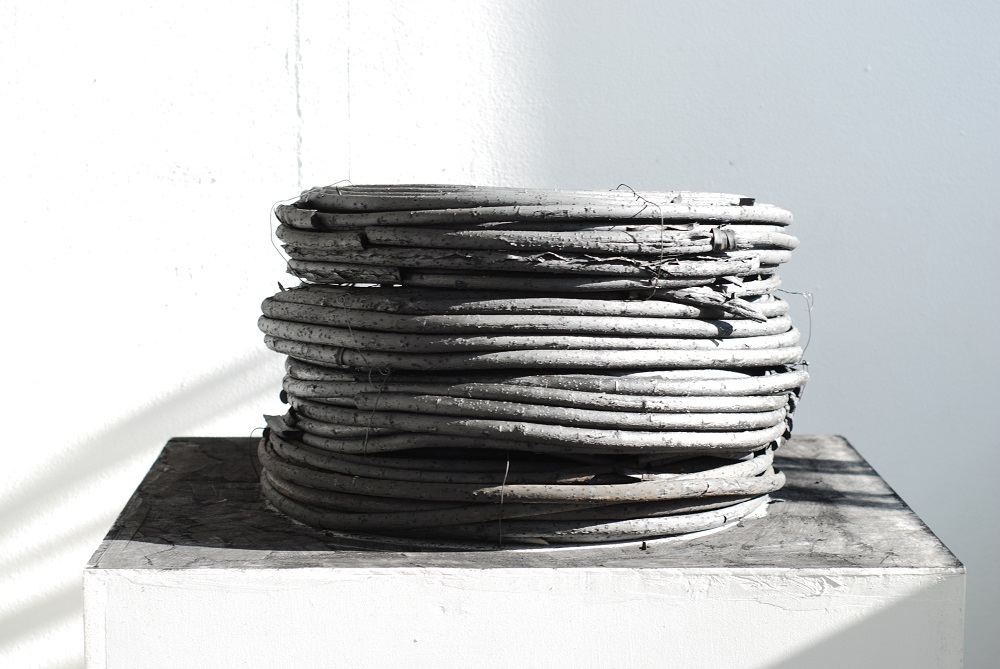 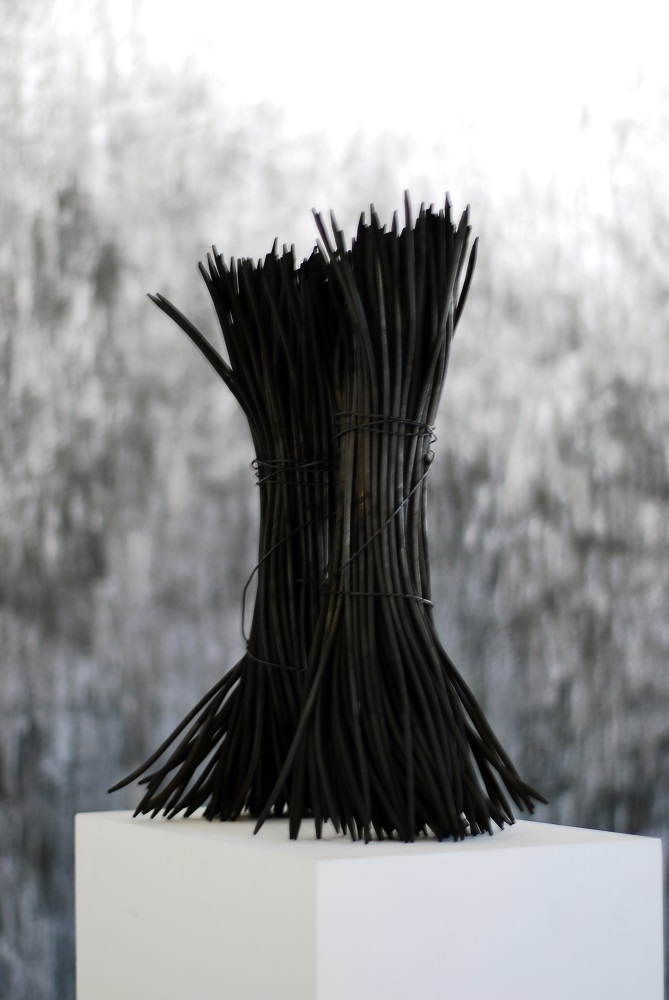 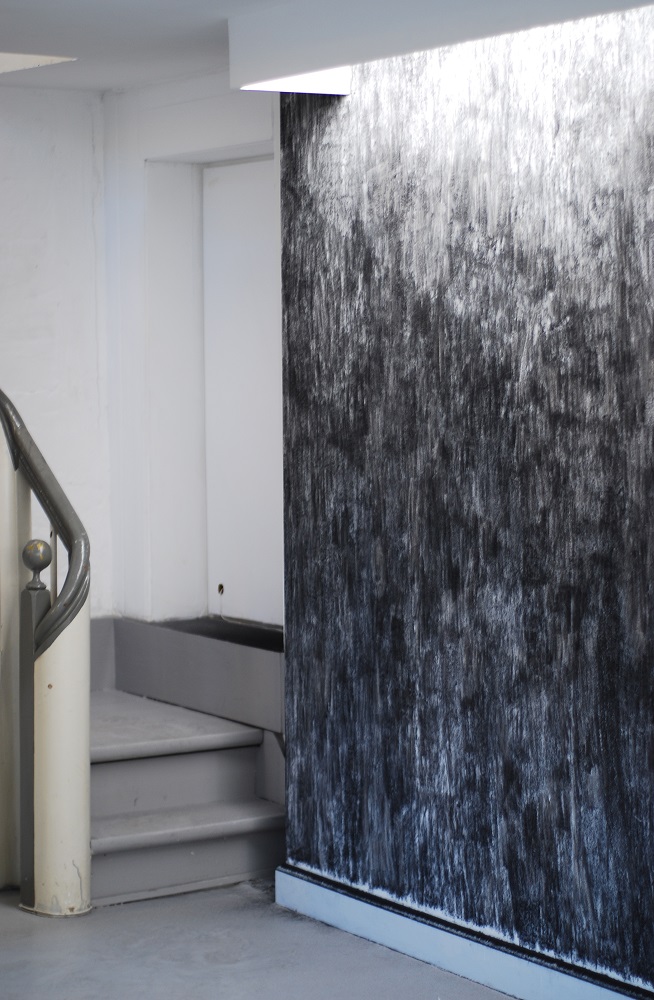 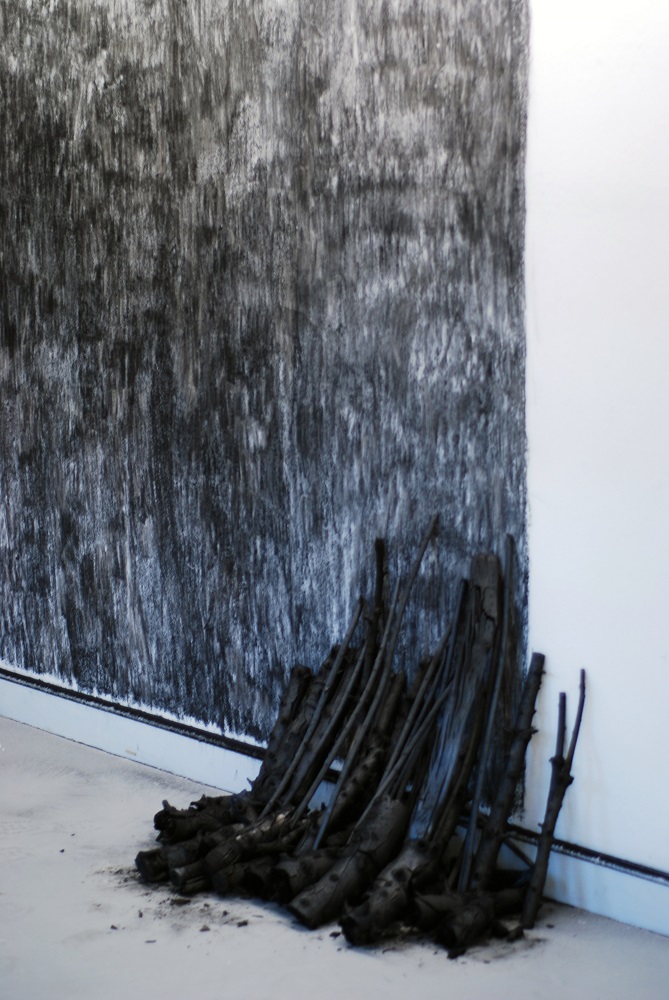 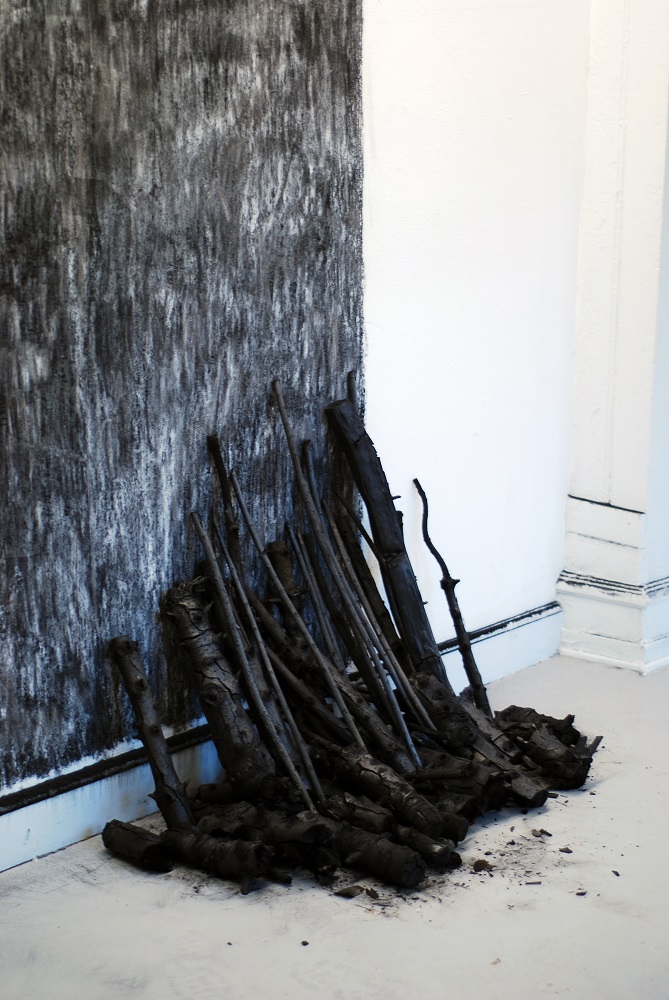 Jens Axel Beck og Ulrike Mohr 18. marts – 17. april 2011 Standing on a Surface Jens Axel Beck. One of my first pair of shoes became a decorative object in my parent´s home. However, it gained that position only after it had been covered by a layer of silver. Apparently the shoe could not stay in its original form and be a decoration. It had to go through a metamorphosis, from a soft and supple material to solid silver. Now it stands on the cupboard in my parent´s living room, a small monument to my first steps. Since then, no one has taken the initiative to silvercoat my shoes, or otherwise materialize my presence in this world. At this point, my moving and walking about seem to occur in obscurity. One can perhaps imagine that if Edward Norton Lorenz’s theory of the Butterfly Effect contains a grain of truth, despite the fact that I do not have butterfly wings, maybe just once my movements started a chain reaction that continued and enlarged, eventually ending up as a hurricane. Would starting a devastating hurricane be regarded as a memorable act? Destructive hurricanes manage to be remembered; despite the fact their force removes our traces. If nothing else, the shoes I eventually managed to worn out serve as confirmation of certain activity. Collected together in a pile, they would constitute a kind of milestone. However, these pairs end up as functionless objects and suffer the same fate as waste. Consider, instead, the possibility that all the tracks I have left with my footwear are memorials of my activities. It is perhaps too optimistic to rely on all these tracks as their life probably was brief. I assume that most are gone by now. Moreover, a European shoe size of 42 or 43 cannot be regarded as something unique. I mean it is pretty much an average size, is it not? Ulrike Mohr (De). When we speak of a ”surface”, we automatically imply that there is something underneath; a lower surface or a reverse side. The surface embodies the thing in its entirety, yet simultaneously remains only a part of the whole; there is more to every material substance than its surface. The choosing of the surface as the view point and focus of artistic research is by no means superficial, the case is quite the opposite. Ulrike Mohr’s work is a metaphorical scratching on the surface of materials, making the individual layers visible and thus communicating the capacity for physical change implicit within each material substance. Standing on a surface involves acquiring a standpoint which is both very close to the object, literally touching the material in question, while also remaining distantly observant. Investigative on the one hand, perceptive on the other, Mohr’s approach to materials and objects is just as refined a tightrope walk between prose and poetry as the writing of Francis Ponge. The French author’s most renowned work bears the French title ”Le parti pris des choses”, which roughly translated means ”taking the side of things”. If Francis Ponge had not used the title already, I would have suggested it be given to the work of Ulrike Mohr. The core achievement of Ponge’s literary efforts was to illuminate the difficulties of the relationship between the certain, the concrete, and the possible, or potential. His success lay in developing a language that was both candid as well as expandable, yet also precise enough to articulate this tension. It is this language which Ulrike Mohr also speaks. Her scientifically exact interest in the transformation of materials from one physical state to another – wood to charcoal, charcoal to oversized drawing implements, leaving us with a fragile and tremulous wall drawing – is evidence of her profound sensibility of the substance matter; of a position ”parti pris des choses”. At the same time it is accurate and sober, leaving the things – ”les choses” – to themselves. The changes of form, which Ulrike Mohr sets in motion may be radical, but they always remain within the boundaries of the naturally possible. As such they are descriptive. The book ”Le parti pris des choses”, first printed in France 1942, has been translated into English and published under various titles such as ”The Voice of Things, The Way Things Are and The Nature of Things”. Each of these titles adheres to a specific interpretational approach to Ponge’s work, but, as a whole, they shape a magnificent synthesis of the problems of the concrete and the possible: of the many lives of things. A cat is said to have nine lives and some believe humans have more than one as well. The things, which comprise the material world surrounding us, have quite a few too. We find this verified in the work of Ulrike Mohr. The voice of things becomes the voice of the charcoal speaking about the horizon on the ocean, as it touches the walls of the gallery. ”The way things are” becomes the charcoal as a burned piece of wood, with its odour and colour, painting my hands black when I touch it. ”The nature of things is a constant flux. Le parti pris des choses” means looking upon the surface of things as they appear, allowing them to speak and to live. Af Alice Goudsmit Udstillingen er åben, Torsdag – Søndag kl.13.00-17.00 Danske Grafikeres Hus, Sølvgade 14, 1307 København K For yderligere information kontakt Jens Axel Beck på jensaxelbeck@gmail.com eller Ulrike Mohr på mail@ulrikemohr.de